Elliot Smith win the 2017 Pokerstars Macau Championship after an 11 hour heads up battle. 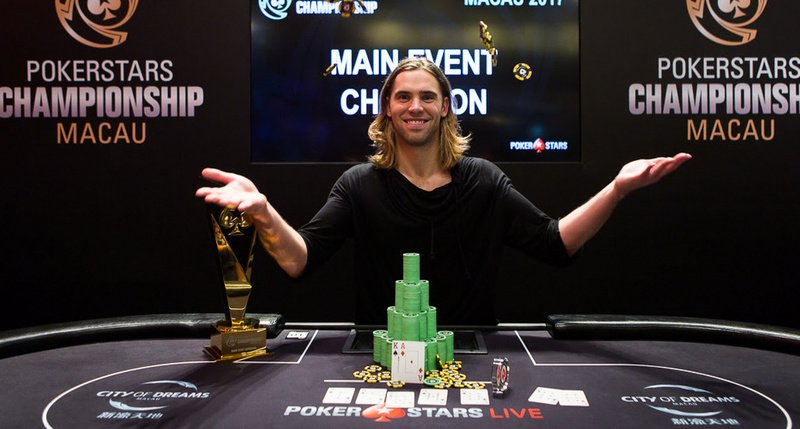 First of all, congratulations Elliot Smith on winning the Pokerstars Championship Macau. It was an epic heads-up match. Before we talk about your fabulous run, please introduce yourself to the community.

Thanks, I feel very lucky and fortunate to have won.  I’ve been playing poker for over 10 years, it’s been a wild ride.  I’ve been to a lot of places I never thought I would travel to – all those times I wasn’t paying attention in French class came back to haunt me.

It was the longest heads-up battle in EPT and PCS history. Could you describe your feelings during this epic battle? Any key situations?

I didn’t know that, but I believe it!  It was a grind, very interesting too because there was plenty of time to adapt and build reads.  Initially in the first two hours I played fast and tried to corner my opponent, but that didn’t work for me so I slowed my pace a bit and really tried to play each hand as best I could.  At times I still feel like I made some mistakes, I really wanted the trophy and letting that idea into my mind was a bit daunting.

As for key situations, I think winning most of the small pots gave me a bit of a buffer when he took down most of the bigger pots early.

What do you do to prepare for these long grinds? Do you play any sports or follow any special nutrition routines?

I try my best to stay on a regular sleep cycle and eat as best I can.  I play basketball and swim, if it’s available sometimes I try to get in for a swim before the day.  It can really set my mind at ease knowing I got in a workout and give me a relaxed feeling at the table.

Do you want to share any insider info on what happened after winning this tournament? Was it a long night ;) ?

The tournament wrapped around 2:30am.  I went to the bar with some friends and left around 5:00am, alone :( haha.  I called some friends and family (it was the middle of the day back home) Then missed my ferry to Hong Kong airport, which was an expensive mistake because I had to spring for the Helicopter which is about 15x the price.  It is a great ride though, I recommend it to anyone that ships a tournament in Macau.

What did you do to prepare for this final table and how did it support your game?

Well I’ve played tournaments for awhile now, but by no means an ICM expert.  I wanted to give myself the best chance so I contacted one of the best in the game.  The head coach at Raise Your Edge, BenCB.  I’ve been fortunate enough to have met Ben previously so I already knew he was a great person and a fantastic player.

It was the evening before the final table, I was going in with a slight chip lead.  It can sometimes feel like a lot of pressure to come out on top in that spot.  The coaching Ben gave me was priceless.  It not only increased my knowledge in certain ICM spots, but also gave me a surge of confidence.  There’s no question it helped my performance at the table.

Did you feel well prepared?

I contacted Ben the night before the final table, so it was late scheduling.  However since Ben has been a top level coach for many years he was fully prepared and ready to take me through some simulations and key concepts that were extremely helpful.  With the time given I couldn’t of been happier with the coaching.

When did you realize that you had a good shot to take it down?

Going into the official final table of 9 players, then being chip leader with 6 left I could see the finish line.  After a quick exit of 4 of the last 6 players we were heads up with over 100 big blinds each.  I couldn’t of been more excited with this spot.  It’s so rare in these big field tournaments to have much play left for heads up.

What are your plans for Scoop?

After seeing Ben as a coach I thought it would be a good idea to continue with Raise Your Edge and am now preparing to work on some more things in the coming weeks before SCOOP.  These are the highest online buyins of the year, a little coaching can go a long way.

By bencb|2019-09-29T12:18:24+00:00April 27th, 2017|
Cookie Notice: We use cookies to ensure that we give you the best experience on our website. If you continue to use this site we will assume that you are happy with it.| Privacy Policy Notice: In order to improve your RYE experience, we collect some personal information. Your privacy is very important to us and we have developed a policy to help you understand how we handle your personal information. By Accepting, you agree to the terms of our Privacy Policy.I acceptRead more