Have you ever wondered how professional poker players adjust their strategy for Bounty Tournaments?

Whether you’re a complete beginner when it comes to bounty tournaments, or if you’ve had some experience but want to go a bit deeper with strategy, this article will give you a great head start towards crushing bounty tournaments in 2022. 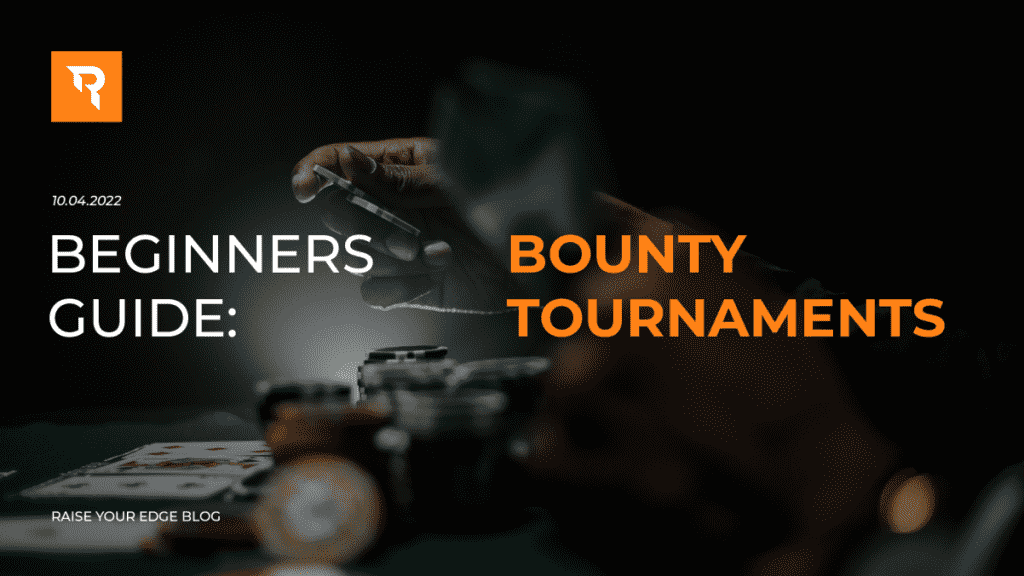 Bounty and Progressive Knockout (PKO) poker tournaments have become much more popular in the past few years.

With almost every major poker site, casino and card room offering bounty tournaments these days it is very important to understand the differences in strategy from normal poker tournaments.

However, before we get into the math behind bounties and the biggest adjustments you’ll want to make with your strategy, let’s provide a brief refresher on what bounty tournaments are and how they work.

What are Bounty Tournaments?

Bounty tournaments function exactly the same as a normal Texas Hold’em poker tournament with one key exception. The only difference is that every player in the tournament has a cash prize on their head.

The person who eliminates them from the tournament will not only receive their chips, but also their cash bounty.

There are two main types of bounty tournaments today, so let’s briefly go over them. 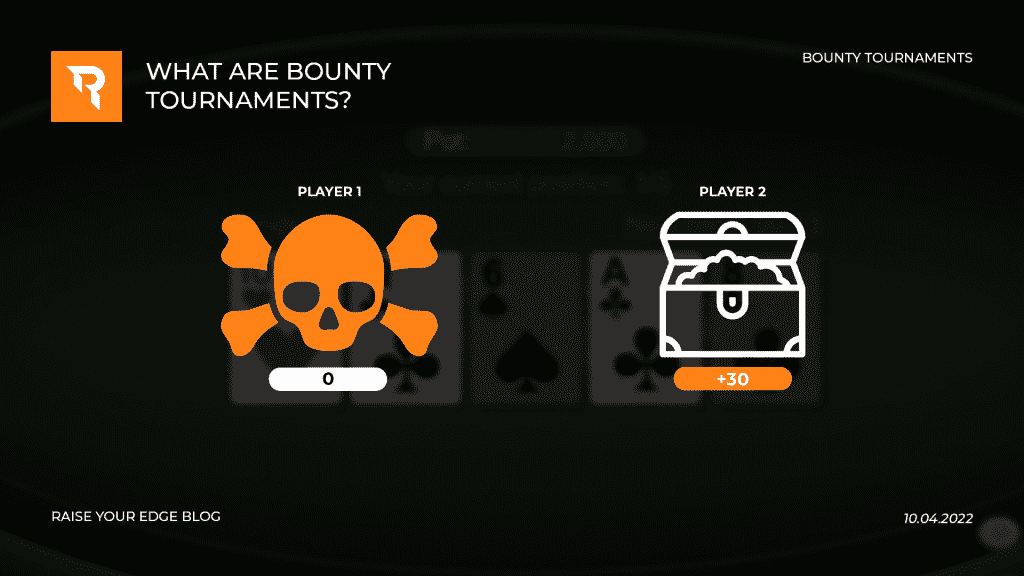 You are playing a $10 Bounty Tournament that has an even distribution between the prize pool and the bounty, meaning that $5 will go to the prize pool and $5 will be placed on your head as a bounty. Eliminating any player will award you their entire bounty. Your bounty and your opponent’s bounties stay the same for the duration of the tournament. If you eliminate 5 players you will make $25, then if you are eliminated after collecting these 5 bounties, your opponent will only receive the starting $5 bounty on your head.

You are playing a $10 buyin PKO Tournament with an even distribution, meaning that $5 goes to the prize pool and $5 is placed on your head as a bounty. You eliminate a player on the first hand and win their $5 bounty. However, instead of $5 going directly to your account, the $5 is split evenly between your account and the bounty on your head. You win $2.50 immediately, and $2.50 is added to your $5 bounty for a new total bounty of $7.50. If you eliminate another player you’ll have won $5, and the bounty on your head will increase to $10.

Now that we’ve refreshed on what bounty tournaments are, let’s briefly run through the basics of the math behind them. If you already feel fairly confident with the basics of bounty math feel free to skip ahead to the strategy and application sections.

The Math Behind Bounty Tournaments: 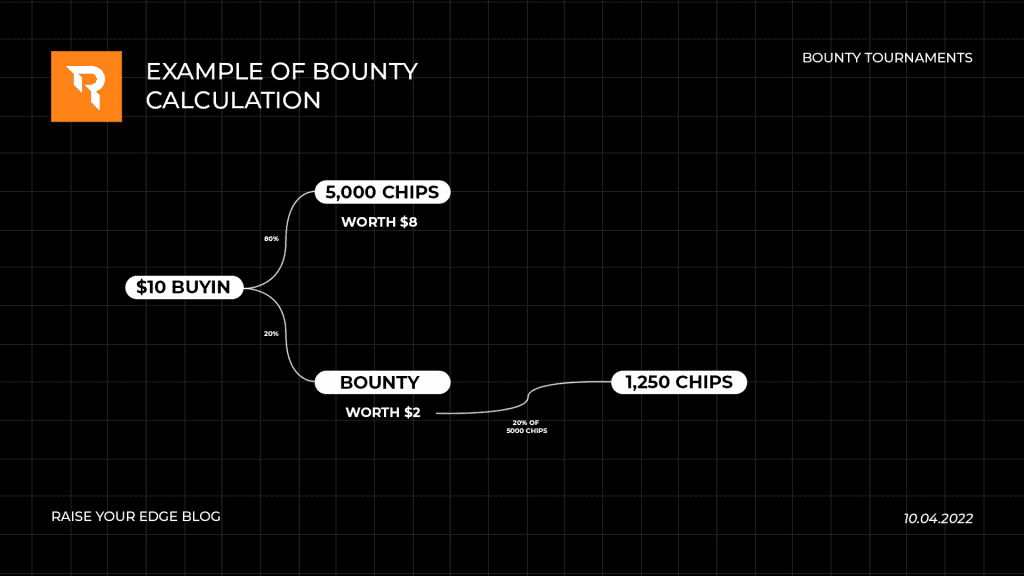 Math in poker can be scary, but it doesn’t have to be!

To know whether calling a player’s all in is the right decision we need to know how to calculate the value of their bounty.

This section will bring you up to speed with everything you need to know about bounty tournament math in about 5 minutes.

Most people get bounty tournament math wrong because of one simple mistake.

The mistake is that they only think about bounties in terms of dollar amounts, instead of thinking about the chip amounts that the bounty is worth.

When we’re working with math for poker tournaments we always want to think in terms of chip value. This means that whenever there is a dollar amount at stake, whether that be the prize pool or bounties, we need to convert the dollar amounts to tournament chips using simple math. Let’s use an example to clear this up a bit more.

How to Calculate the Chip Value of a Bounty:

In a Classic Bounty Tournament this is fairly easy. You can calculate the amount your bounty is worth at all times simply by knowing how much of your money went towards it, as well as how many chips you have.

Let’s assume you paid $10 to enter a bounty tournament with 80% going to the prize pool and 20% going to your bounty. If you were given 5,000 chips to start the tournament, that means that you paid $8 for those chips and the remaining $2 for your bounty.

In a Progressive Knockout Tournament the math gets a bit more complex.

Let’s say you enter a $10 PKO Tournament where $5 goes to the prize pool and $5 goes to your own bounty.

Your starting stack is 3,000 chips, meaning that your bounty would be worth an equal 3,000 chips.. Right?

Why is each bounty worth a little more than 1,500 chips? Because, there is always a chance that you will win the entire PKO tournament including the bounty on yourself.

So, each bounty is technically worth a little more because of the chance you have of winning the entire tournament and collecting your own bounty. These chances go up as you reach the final few players, but for simplicity you can just assume each bounty is worth 50% of it’s total chip value, at least until you reach the very late stages of the tournament.

Accounting for ICM in Bounty Tournaments:

While the above math-y section should give you a good foundation for understanding the math specific to bounties, we also have to take into account the Independence Chip Model (ICM) and how it applies to bounty tournaments.

If you need a refresher on ICM you can check out our simple breakdown here.

Basically, one of the core principles of ICM is that every chip you earn is worth less than every chip you lose. In other words, it is more valuable to keep the chips you have than to gain additional chips in a poker tournament.

Without accounting for ICM in a bounty tournament, the total monetary value of your stack could theoretically increase to more than than the first place prize, which is obviously a mistake.

Furthermore, you can often call all-ins wider in bounty tournaments than an ICM range would allow, since you’re calling for the additional value of the bounty. In other situations you’ll still need to tighten up due to ICM pressure.

Hopefully all of this math talk didn’t scare you away! Now let’s dive into some common mistakes players make in bounty tournaments and how to capitalize on them.

Common Bounty Tournament Mistakes (and How to Exploit Them)

Bounty tournaments can sometimes cause your opponents to lose their minds! Chances are, if you’re playing any low to mid stakes bounty tournament ($100 buy in or below), most players will make massive errors all of the time. Capitalizing on these common leaks that players tend to have will print you money over the long term.

Let’s dive into some common mistakes players make in bounty tournaments at low-mid stakes and how you can capitalize on them.

Mistake #1: Playing Too Tight Early in the Tournament 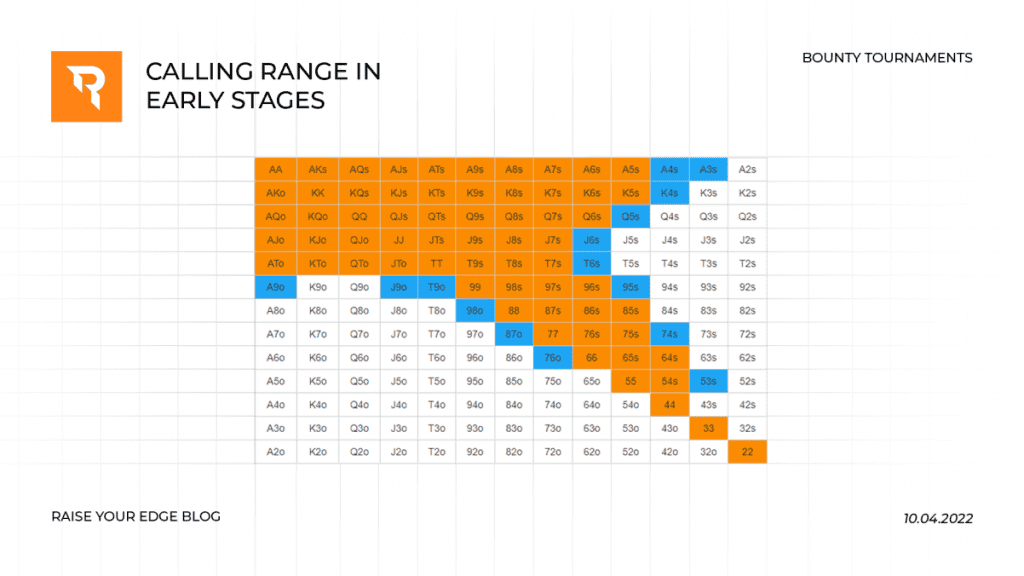 The first mistake players make all the time in bounty tournaments is not calling wider than their default range when a bounty is on the line.

It’s important to remember that since the bounty is usually worth a significant portion of your chipstack early on, a bounty on the line can greatly decrease the amount of equity that you need to call an all-in.

In the early stages of bounty tournaments, if you can win a bounty you need less equity to call an all-in. Most players as a result play far tighter than they should and leave a lot of money on the table.

Think of it like this. In the early stages of a tournament your chipstack is very likely to be decently similar to the value of any bounties in play. As we broke down in the math section above, in a Classic Bounty Tournament your bounty starts out being worth anywhere from 20% to 100% of your chipstack.

Hopefully you can see how we have to call more often with a wider range of hands because of the better price we are getting early in the tournament.

Mistake #2: Playing Too Loose Later in the Tournament 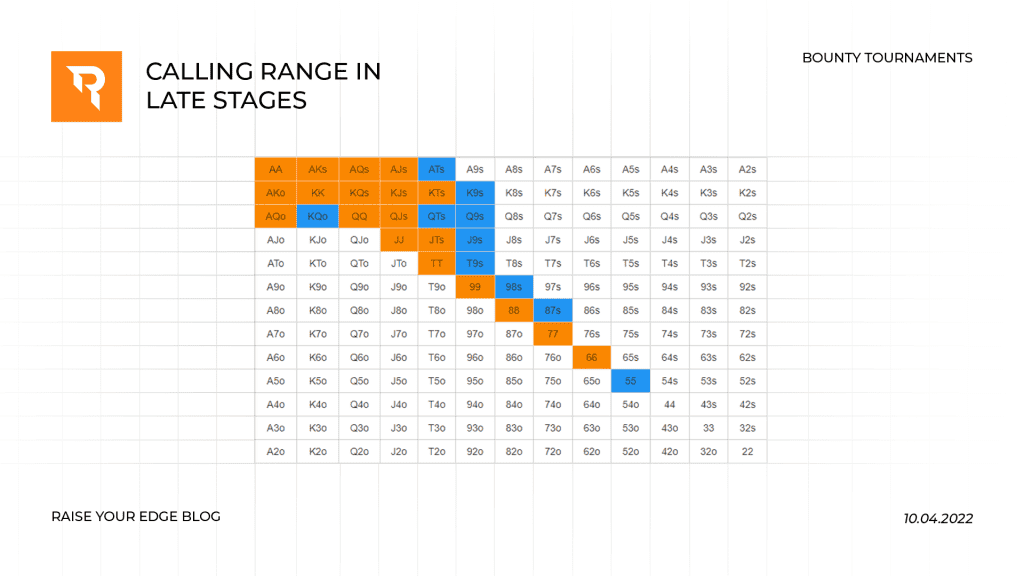 As the tournament goes on you have to tighten up considerably, since the bounties at play start to become much less valuable in comparison to the chip stacks at stake.

At the start of the tournament the ratio between bounties and stack sizes is fairly similar.

However, as the tournament goes on and stack sizes increase, that ratio becomes wider and wider.

Most players struggle to make the adjustment from playing very loose and aggressive early on in the bounty tournament to tightening up and worrying more about ICM and stack preservation later on.

Understanding this shift and being able to adjust correctly will definitely separate you from the pack, especially if you have a good understanding of ICM already.

Bounty tournaments have sky-rocketed in popularity for a reason. They’re super fun to play, everyone has a chance at some money if they can just knock out a single player, and many people are still very bad at playing them correctly. This means that with some dedication, practice and study you can quickly start crushing the competition in these tournaments at low-mid stakes.

If you’d like to learn more about bounty tournaments for FREE, check out this video from Bencb explaining the intricacies of PKOs:

And for more information on getting started studying bounty spots watch this:

If you’re serious about your bounty and PKO tournament game and are ready for a step up in instruction, you can check out our in-depth Bounty Beast Course taught by Bencb along with bounty expert W3c.ray. Check out Bounty Beast today by clicking here.